When it comes to picking up your e-cigarette, tank or coils,
it’s essential to know what style of vaping suits your needs. Vaping mainly consists of two styles – mouth to lung (MTL) and direct lung (DL). What’s the big difference here?

Should you ever choose to get into vaping, you are making a wise choice and set off on the way to a healthier you. However, like any other industry, vaping is full of acronyms and nicknames for things. Bit of a nightmare, huh? No worries, we will try to simplify it for you so you can make sense of it.

If you want some help, then we recommend that you start with the following information about vaping. There would be two kinds of vaping if you weren’t aware. One is known as MTL vaping, and the other is known as DL vaping. Both are very enjoyable, but most vapers have a preference in how they enjoy their experience. So, what does it actually stand for?

If you have come from smoking cigarettes in the past, then you will immediately notice the similarity between MTL vaping. It’s much more like the ‘real’ thing if that’s how you want to view it. However, it’s important that you can grasp both forms of vaping properly. Let’s take a look, then, at the crucial details that exist around vaping today.

What is MTL vaping?

As mentioned above, MTL vaping is known as Mouth to Lung. This is a normal way of smoking, and if you were to take a draw on a vape without thinking, this is probably what you would do. It’s the most common way that you would have smoked in the past. For most people, MTL vaping is the way to go. At least to begin with!

If you are used to smoking any other kind of cigarette, you take a pull here in the same way. Start by drawing the vapour into your mouth, holding it in the mouth for a second, and then bring it back down to the lungs. Then, just simply exhale and let it all burst out into the room. 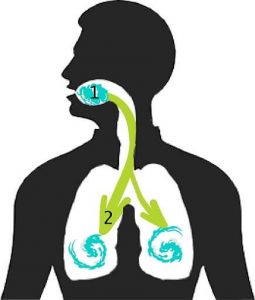 MTL is usually quite restricted in terms of airflow, so you should keep all MTL vaping to lower power levels. If you are using MTL, you tend to notice more of the taste and flavour of your vapour. This is because it sits on your taste buds for a wee bit longer. If you want to try and make the switch from ‘normal’ cigarettes to vaping, then MTL vaping will quickly feel the most natural to you.

What is the DL style of vaping?

DL is a bit different to the above. Known as Direct Lung, this is all about taking the vapour right down into the lung in one singular inhale. Imagine you are taking in a massive, deep breath. You don’t take any air into the mouth, nor do you hold it in the mouth for any period of time. What you do here is that you take it right down directly into a lung – it’s the way that most ‘hardcore’ smokers enjoy their vaping. 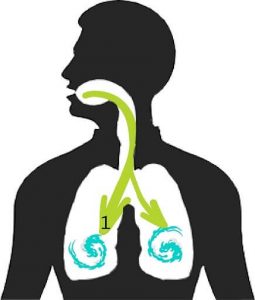 It’s often a choice recommended purely for vapers. Smoke like this for too long with a regular cigarette, and you’ll soon feel the impact on your lungs. With a vape, though, it’s nowhere near as pronounced. Just make sure you clear your lungs of air before you take a deep breath with a DL draw.

These are often used by those who are using more high-powered vapes. If you want to produce loads of vapour when you exhale and that more specific hit to the back of the throat, be sure to try out the DL style of vaping. It’s a tough one to get right and not suited to beginners, though; you’ll probably end up hacking and coughing the first few times. If you get used to the intensity, though, this is often the preferred method of vaping for many vapers today. Remember that the direct style of vaping requires very low levels of nicotine. 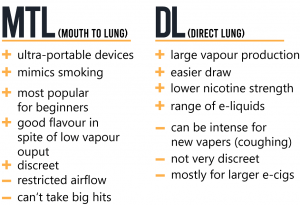 So, the best thing that you can do as a vaper is to try both out. We cannot say which one is the right one for you. If you are a beginner, though, we recommend getting used to MTL vaping first. If you struggle to hold down an MTL inhale, then you will struggle with a DL hit. So, try and get yourself used to MTL first, and you can later try out DL and find out how much/little you enjoy the sensation. It’s a tough thing to get right, but we recommend trying out both. If you give them both a try, you’ll soon have a much clearer idea about what kind of vaping will be the most enjoyable experience for you as a whole.

This website uses cookies to improve your experience and you must be 18 years old or older to use this website. We'll assume you're ok with this, but you can opt-out if you wish.
Accept Reject Read More

This website uses cookies to improve your experience while you navigate through the website. Out of these, the cookies that are categorized as necessary are stored on your browser as they are essential for the working of basic functionalities of the website. We also use third-party cookies that help us analyze and understand how you use this website. These cookies will be stored in your browser only with your consent. You also have the option to opt-out of these cookies. But opting out of some of these cookies may affect your browsing experience.
Necessary Always Enabled
Necessary cookies are absolutely essential for the website to function properly. This category only includes cookies that ensures basic functionalities and security features of the website. These cookies do not store any personal information.
Non-necessary
Any cookies that may not be particularly necessary for the website to function and is used specifically to collect user personal data via analytics, ads, other embedded contents are termed as non-necessary cookies. It is mandatory to procure user consent prior to running these cookies on your website.
SAVE & ACCEPT